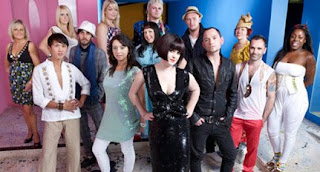 I have to admit, I have been going through Project Runway withdrawals. The Christian Siriano cameo on last week's episode of Ugly Betty got me all nostalgic for the "fierce"! So i went in search of a remedy to my cravings and found that adding a little international flavor to the mix can really tie you over... My solution: Project Catwalk! This british version of Project Runway is a bit more quirky with a better soundtrack, more partying and even wackier designers. Basically, the accents make everything more entertaining. Kelly Osbourne serves as the British version of Heidi Klum, and while she has no "Aufwiedersehen" tagline, she definetly rocks the bob (or chop as they call it in Britain). It's a worthwhile distraction for those of you that have a lull in the frenzy of finals, want to take a break, or just want to check in on whats going on in the British fashion scene! I've found one site for watching Project Catwalk, although you can't make it fullscreen and its only the third season...if it says "video no longer available" then just hit refresh or check back later. Anyone else know of a better site?
p.s. be sure to check out Britains Next Top Model as well!
Posted by Anina