Perfection is in the eye of the beholder...or the one who holds the mouse 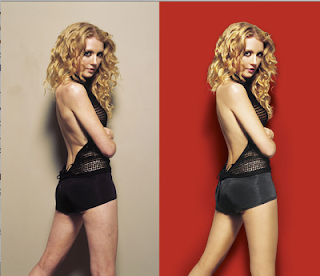 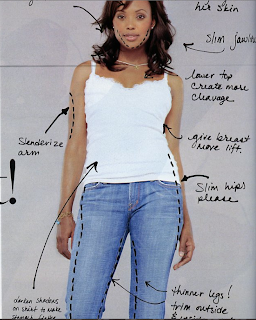 Have you ever wondered just how much touching up models in magazines like Vogue, Lucky and InStyle actually require to get that "perfect body?" Well "Pixel Perfect," an article in the May 12th edition of The New Yorker Magazine, may have that answer for you. The article, found here follows Pascal Dangin (premiere photo retoucher--he did 144 images in the last Vogue, of both advertisement and spread photo shots) through the surprisingly complicated task of photo retouching. These days, there's a lot more to the job than simple blemish removal.
The article frustrated me for several reasons, mostly because it shows that even these so-called "perfect" and slender models are getting retouched just as us curvy girls are. Some of you may remember that Dove ad campaign entitled "real women"--well, Dangin retouched those women too and apparently, there was nothing at all "real" about those bodies. But he also messes (often drastically) with the stick thin models used in Vogue shoots. We're all aware that retouching happens, but I still think it's important for those of us interested in fashion to realize that we have to work with what we've got--we shouldn't continually focus on achieving a certain kind of body just because that's what's advertised. Because the reality is that that body just doesn't exist. I propose that for Spring/Summer '08, all of us fashion obsessives try something new: sincere body appreciation through the art of a good outfit. Here's to a little body lovin'.
Posted by jenny