I seem to have lost track of the number of days Fiona has been in New York! But here are updates and pictures from a couple of the shows she went to yesterday... -- Karen Kwok, BARE magazine blog editor
I found myself alone in the morning as everyone was off at shows and I didn't have anything until 3 pm. I was going to try my luck at Band of Outsiders but security was tight because Kanye West and his entourage were there along with many editors, Jason Wu etc. I decided to head over to the McQueen for Target warehouse which was all the way to the west of Manhattan. I was disappointed because none of the cool dresses were there. They only had the button-downs, the crazy bright pink and black striped attire, and some other random stuff. I left dejected but was quickly cheered up by a text invite to the Jeremy Laing show.
That show is definitely in my top 5 with its tailored black dresses and pants, bursts of orange and blue color, and drapey chiffon layering. I went backstage and overheard Laing talking about how his inspiration came from the mechanics of cars, which definitely made sense. In attendance was Susie Bubble, Kate Lanphear (who I held the door for), Mickey Boardman, and Lynn Yaeger from Paper Magazine. The buyers in front of me both circled outfit 7 which comprised of a cropped funnel jacket with a printed shirt underneath and skirt. 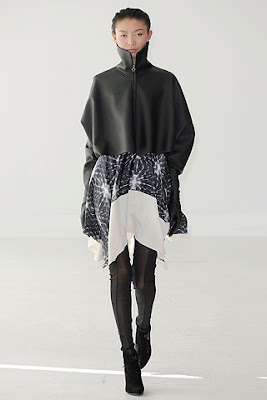 Picture from style.com
We then ran back to the tents for another show, which we were very late for and barely made it in the show on time. I was pretty fatigued at this point and could hardly focus on the clothes but I do remember a zipaway dress and a white coat with black flowery details that I loved. We bolted out and ate at Le Pain Quotidien really quickly. Before heading to the Twinkle presentation, I got a chance to talk to both Craig from Altamira and Tommy from Jak&Jil who were both incredibly nice.
We finally made our way to Twinkle after getting lost (and conveniently stumbled into the Rick Owens store). The fact that we got there later served to our benefit though because there was actually space to wander around and see the clothes. The presentation was 50s-themed, complete with models posing on vintage cars, rollerblading girls serving bottles of coke and popcorn, and an Audrey Hepburn movie playing in the background. The knits were amazing and the collection was very feminine and floral. I took a picture of a particular piece I liked.

We ran back to the tents for the Akiko Ogawa show but we were too late and the show closed. I took a five minute power nap in the carpeted corner of the tent as I was too overwhelmed to deal with sneaking into Erin Fetherston (which apparently would have been worth it). We met up with Connie afterwards and grabbed dinner before heading to the Erin Fetherston afterparty at the Rose Bar. I spied Leigh Lezark smiling (for once) for a photo and the drunken antics of Zoe Kravitz. Erin was drunk and smiley with her husband, celebrating with good reason, I assume. I had a chance to go to the Norwood, which was throwing a party but was too tired to deal with it. I found out from my friend that Alexander Wang and Marc Jacob's boyfriend were there though. I missed out!

Connie and I fatigued at the tents