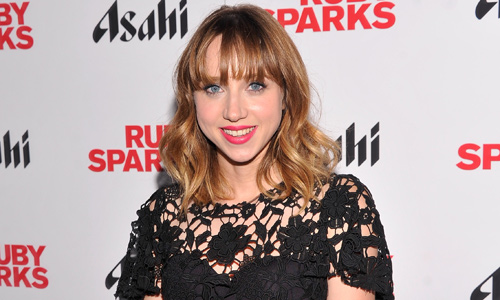 You may remember that BARE gave away free passes to the recently released film Ruby Sparks last month. Lucky for us, we were also given the opportunity to interview the leading actress and the movie's directors! Check back in for our interview with directors Jonathan Dayton and Valerie Faris, but first check out what writer/actress Zoe Kazan (who plays the part of Ruby) had to say about fashion, the Bay Area, advice for students, and more!

Thanks for meeting with me Zoe! I'm with my school's student-run fashion magazine - BARE Magazine - over at UC Berkeley, and a lot of our readers are from the Bay Area. So my first question:

Do you have a favorite thing to do while you're here? Have you ever been here before?
I have! My dad spent a lot of his young adult life here. Growing up he had a lot of friends here so we used to come up a bunch - I grew up in LA - so it's not that far…I love the culture here, you know the bookstores and the music and I guess my favorite thing to do is kind of get lost. It's actually kind of my favorite thing to do in any city - walk around and get lost and see the things you're not gonna find recommended to on Yelp.

How did you come up with the look for Ruby? I saw the colored tights, the dresses…
We have an amazing costume designer called Nancy Steiner who did Virgin Suicides and she did Little Miss Sunshine too…and she's just really smart, and funny. She and the directors had a whole image list that had a lot of like French Nu-Wave but then some much more modern stuff and then she pulled a bunch of stuff. For me, actually, the clothes help me define the character - that's where I learn a lot about who that person is. We just did a bunch of fittings where I'd try on clothes and sort of go, "Oh she likes this, like I don't know why cause I don't like it, but she likes it!" And Nancy has just a beautiful eye and we knew we wanted a lot of color.

Like the main character Calvin, you are a writer. How much of him do you identify with? Do you ever write to spend time with your characters like he says he does in the movie?
I do feel that way. I mean I really identify with the feeling…like I think Calvin really feels visited by Ruby. Not that he's inventing her but she's somehow coming through him you know. And I very much feel that way when it's all cooking. Like the characters are just speaking to me and I'm writing it down. And I do - when I'm really in love with the thing I'm writing, or having a great time with it, I would much rather be writing at home than out with my friends.

Do you just like sit by yourself and it kind of comes to you? Or do you start working a little bit and it progresses from there? What works for you?
Usually the first inspiration just kind of hits me like a lightning bolt and I get as much of it done as I can. And I think yeah you know you're never gonna write unless you sit down and start writing so a lot of the times it's like a process of writing badly for a little while and then the muses start talking to you again. I have a challenge because I have this other job - acting - and it takes up a lot of my time so I'm always writing when I can grab the time. So I feel like because of that I kind of store up a lot of my writing energy so often when I sit down I can write very quickly. But in the times when I've had more time to write, yeah it definitely requires you to warm up.
I know you're also an established playwright and this is your first screenplay. Is the writing process different for a movie than for a play?
Yeah, I mean it is and it isn't. It requires the same sort of work - when you're writing a movie you know there are gonna be all these other elements that are gonna come on, like editing and music, the cinematographer, the set designer…there are some of those elements in theater but they're pushed a lot more by the words. Dialogue moves the play forward whereas in film you can just keep coming, or you can have a silent scene with just images. I think it's good to know the limits of the medium.

Do you have a favorite scene from this movie?
I like the stuff when Paul (who plays Calvin) does all the physical humor he does when he thinks he's going crazy!

So you and Paul have a relationship off-screen..does that help you guys play the roles you have in the movie?
You know I think it helped me like I could go further…we know each other so well, we've been together almost five years. And I feel like I can't embarrass myself in front of him so I feel like I can go further than I could in front of a stranger. But you know at the end of the day, he's just an actor I'm working with and we really didn't bring our relationship to set.
What was it like working with Jonathan and Valerie? What do you think sets them apart from other directors?

The main thing I think is that they are sticklers for the script being ready. You'd be amazed at how many directors will go into production with a script that's not all there and just sort of say "Oh we'll fix it as we go" or "We'll improv it" or "We'll fix it in editing". They insist on the script being ready, and put a lot of time and energy into developing it…which just means them giving me notes and responding to my drafts and sort of you know working together to get the script ready to be the movie that we want it to be. I think they do that better or more thoroughly than anybody I've ever worked with.

You mention the Pygmalion myth and how it inspired you to write Ruby Sparks. Can you think of any other myths that you would like to come to film?
Yeah there's a beautiful myth of Psyche and Eros…I think so many of those myths hold psychological truths and we can look to them for inspiration.

When did you start reading all of those kind of stories?
When I was a little kid. My dad is half Greek and I think I was just really excited and interested in learning about our heritage, so he gave me a book of Greek mythology.

Did you start writing really early?
I always wrote…I think it was just like…I always loved stories. I loved reading and I loved writing. I didn't think it was something I wanted to do professionally but yeah I always did it.

And you come from a family full of writers. Aside from that and your experience in the film business, do you have any advice for readers - especially university students - on what they should do if they wanted to get into that kind of thing?
Yeah I mean, first of all I would say that the best thing that my parents ever did for me - I really wanted to go to The Conservatory for acting, instead of going to like a regular college - they insisted that I go to a university. And I'm so glad they did because the classes that I ended up having to take for a requirement, the classes that I wasn't actually interested in, are now the ones that I feel like I learned the most from.
And I wish I had taken more classes outside of my major. Like I was so concerned about getting good grades and being a good student and I would take classes because I knew I would get an A in them you know, like I knew I would do well or I was already interested in it. And I look back, I would take classes on bioethics or sociology - classes to fulfill requirements. And I think, I wish I had taken more of that, I wish I had taken more psychology…those classes are the ones that feed me now as a person who is creative. If you just study the stuff that you're already interested in, you're never gonna expand your horizons. And I think it's so important to be curious. Curiosity is such a hallmark of creativity for me. And I would just say take as many different kinds of classes as you can.

So what's next for you? What kind of projects do you hope to be doing in the future?
I'm about to be shooting a movie with Daniel Radcliffe, a romantic comedy called The F Word, that I'm going to shoot in Toronto. And I shot three other independent movies this year, and I'm really hoping after this to be able to just do some writing. Because it's been a crazy, busy year and I haven't gotten a lot of time to do that.

Time to just like settle down, spill on the page…
Yeah! Completely! I miss it so much.

One last question, since we're a fashion magazine…where's your favorite place to shop?
You know I love shopping in thrift stores in LA. Especially like in the Valley, they have really good, cheap thrift stores…I shop online on like the Outnet, which is a discount outlet online. I just never really spend that much money on clothes to be totally honest. I mean I love clothes, but my mom is super thrifty so she's engendered that in me, like I'm always looking for the bargain!