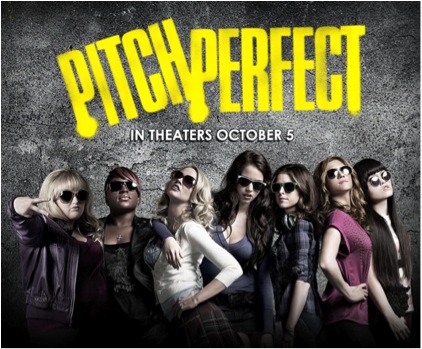 When you think about it, there have been lots of conventional films based on a competition motif and a romance happening somewhere in between. You name it, there’s one about practically every competition out there such as the classic Bring it On and Step Up series. However, what Pitch Perfect has to offer is not the bunch of clichés you can predict from seeing other competition movies.

What’s more, it’s not your typical, musical film either. As Brittany Snow and Anna Kendrick state in their interview, people don’t start bursting into songs like the tv show, Glee. There’s a purpose for the singing, and it’s solely to carry out parts of the competition or a riff-off.

What is a riff-off you say? A riff-off is a part in the film where the acapella groups battle each other in a series of songs based on a set theme. This part is one of the main scenes where it exemplifies the film’s musical taste. Jason Moore, the director, who has previous experience with Avenue Q, showcases the vast genres, current and past, that are prominent in the film. The great advantage of his music selection is that it’s relevant for all ages. You’ll never fail to get chills from the perfect harmonization that occurs throughout the film.

There are also many live singing scenes captured on film. Anna Kendrick explains that she tried to do most of her singing parts live because the recording studio effects would mostly hinder and block the performance aspects of singing. Her most poignant moment was the live shower scene, in which Brittany Snow’s character confronts her to get her to sing. This part was harmonized on set, and by the end of the shoot, Kendrick didn’t feel awkward at all singing nude with her costar.

Another strong aspect of this film is the exposure of great, new talent. Who knew that the stars of the film could sing before? Actress Rebel Wilson took on the soprano’s majorly high notes while Hana Mae Lee spat out beatbox beats she learned in a month during “boot-camp” rehearsals prior to filming. What’s more, regular students of Tulane University fit right in to the high musical caliber of the film.

Ranging from barfing to shower scenes, Pitch Perfect definitely has original and unconventional ideas that stray away from what you might think a competition or singing film has. Additionally, this film gets rid of all typical, stereotypical notions that you might have regarding acapella groups and chick flicks. Truly, the whole audience doubles over in laughter nearly every minute!

You’ll get caught up in the strong characters built in the story, such as Fat Amy, played by actress Rebel Wilson, who actively used all her ad-lib moments to such a great extent that they’ll become classic one-liners everyone remembers. You’ll get more than what you expect in the film and will have a blast watching it. So don’t hesitate to fully experience Fat Amy’s greatness!

The trailer doesn’t do it justice, but to gain a taste of it, here it is: